Community Support
by Members of the
​ Woodworkers of Central New York

Members of the Corporation are very generous with their time and talents.  Throughout the year we participate in a number of special events each year that support the Central New York community.  We also have members who donate items on a regular basis outside of our special events.  Below are photos of individual donations not associated with a special event.  Individual pages with information and photos of each event are linked below.
​
The Club was recognized in May 2021 for its dedication to community service through a monetary grant from CNY Tuesdays, an organization funded by Adam Weitzman of Upstate Shredding.  The grant will assist with funding shortfalls as a result of two years of no NYS Fair and thus no raffles.  The video talking about the club is HERE.
Wooden flags built and donated by John Anderson of Lake Effect Farm in 17075 Cook Rd, Watertown, NY.  John is a veteran who can be contacted at mscoolcows@aol.com.

Hose Laying Prop Donated to BCSFD
At the December 10, 2018 Annual Meeting, there was a request from the membership that a donation be made to the Belgium Cold Springs Fire Department (BCSFD) as part of the Corporation’s ongoing community support and in recognition of their allowing us to utilize the Community Room at their Station One for meetings and events.  A cash donation was discounted by Charlie LaPrease, a Captain at BCSFD.  However, he noted that after discussion with one of the assistant chiefs and two of the lieutenants, they suggested that the Woodworkers could donate funds and build a hose bed laying prop that will allow training on how to properly deploy and reload the fire attack hose without taking a piece of apparatus out of service while training.
On Wednesday, February 13, 2019, a team of three firefighters along with Charlie built the prop in the Eight Acres Shop. During the build, Charlie educated each of the firefighters on proper safety procedures associated with each tool used.  None had used a router before so each was given an opportunity to use it after instruction.  Other tools used included the miter saw, circular saw, drill, angle grinder, various hand tools, and various measuring tools.  Interrupted just once by an emergency call, the Team completed and signed their work by 4pm that afternoon. The prop was introduced and successfully used during the weekly drill on February 28th.
The cost?  Just over $100.
The Experience?  Priceless! 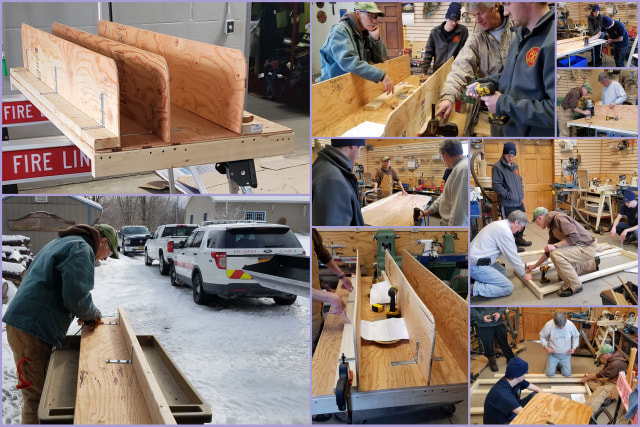